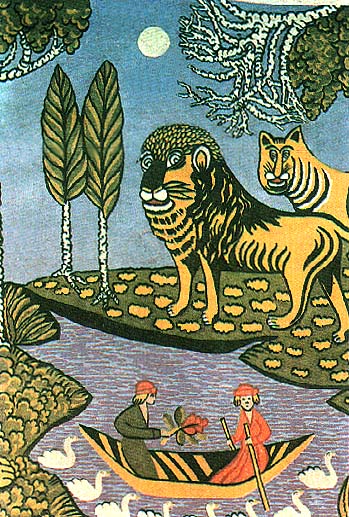 Textile is one of the most ancient art forms in Belarus. To these days some objects of clothing dated XI-XIII c have been preserved and excavated by archeological expeditions near Minsk, Polacak etc. In XVI-XVII cc textile production is spreading in Belarus. The most known centers of it were Dubrouna, Pahost-Zaharadski, Klecak, Polacak, Kapyl', Slonim, Mir, Hrodna, Miensk. Slucak masters were known for their exquisite Slucak Belts, which were famous far outside the borders of Belarus. More detailed information about local textile traditions for different regions of Belarus is given in a pdf abstract of Belaruski Rushnik book below. For now we just show below some examples of the Belarusian traditional textiles. These are the objects of an everyday life mostly. You can see the dominance of traditional Slavic colors -white (purity) and red (joy).

Home-made towel - "ruchnik" is still an obligatory object in any wedding. The guests are traditionally greeted with round rye bread and salt on ruchnik. There is a lot of other ritual uses of "ruchniks". One of its important function is to dress icons (see below).

Because of the great ritual and sacral function of ornamental towels in traditional Belarusian culture we have made a separate page about Belarusian Ruchniks based on this great book by Vol'ha Labacheuskaia published in 2003. 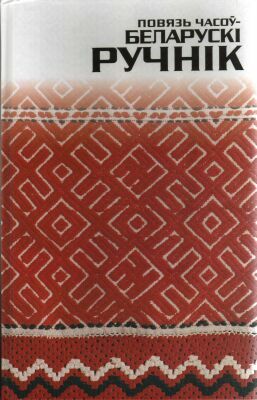 This is the cover of this excellent and well-illustrated book of Vol'ha Labacheuskaia "Link of Times - Belarusian Ruchnik" (translated by A.L. Vasil'eva). The book contains color photos of 221 Belarusian ruchniks dating late XIX and XX centuries from collections of 11 ethnographical museums in Belarus. You can attempt to purchase the book on-line here or here.

Some regional examples of Belarusian Ruchniks ornaments from the book by Labacheuskaia are shown below:
Central Belarus: 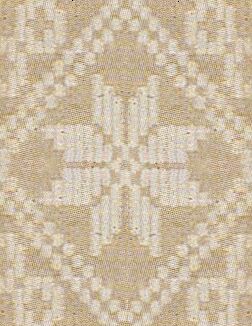 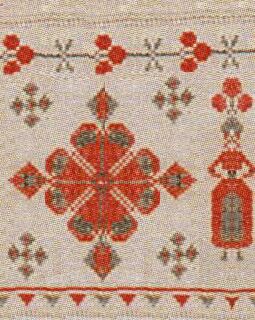 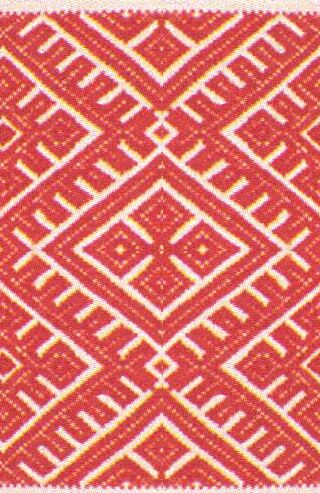 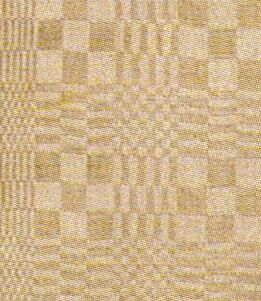 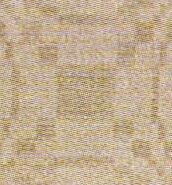 "The main material for textile goods of Belarusians were flax, sheep woolen cloth, hemp. Threads were died using natural dyes based on flowers, grass, tree bark, and thus the traditional palette of Belarusian textile goods was moderate and not too bright. Only at the end of 19th century due to wide use of industrial products and synthetic chemical dyes it becomes more bright and saturated, which also reflects in more complex character and composition of decor. Nevertheless the most characteristic to Belarus are white flax textiles with delicate ornament, which was created either via special technology of weaving or alternating of bleached and raw flax threads [2]:

The components of clothing, textiles of ritual and decorative usage (ruchniki, etc) made from bleached flax were decorated with embroidered or woven ornaments of general Slavic rhombic-geometrical character of symbolic red color, sometimes with addition of yellow and black" [2]

"All processing of raw material and preparing it for textiles was done by hand - usually by women. In October the flax was pressed, tousled, combed. In November the thread spinning was started. Threads were weaved either with the use of spindle or a wheel. After that threads were prepared for either bleaching, dying or yarning (A.A.: making one thread out of two or more)." [3] 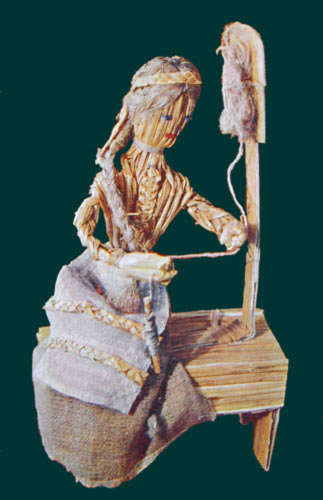 "Bleaching. Woven threads were soaked in alkali in a tall wooden vessel ("zhlukta"), where it was soaked in boiling water and alkali. Then the solution was drained through a draining valve at the bottom and threads were rinsed in water, beaten with wooden stick ("pral'nik") and rinsed in the river. After that threads were laid on the grass in the sun. This method existed till mid 20th century, when it was replaced by bleaching with chemicals." [3]

The "hi-tech" barrel zhlukta (left) and less fancy "kadoub" zhlukta (right, village Zaperynne, Puhavichy region) made in a shape of wooden tube out of a single tree trunk are shown below [3]: 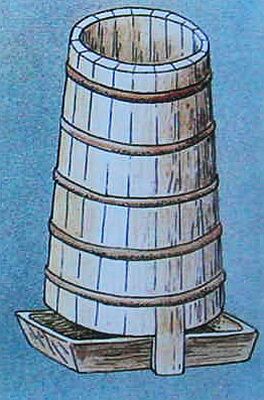 "Starting in XVII century Belarusian estates had special bleaching buildings - "bialil'nia". It was usually 3 chamber building with a patio for bleaching threads in the sun. There was also "valkounia" room where bleached textiles were pressed on special rollers - "valki". [3]

"Zhlukta. It is a special barrel standing on three feet about 1m tall. The threads or textiles were placed into “zhlukta” and soaked in alkali or dusted with ashes (birch ashes were considered the best suited), then boiling water was pored on top. After some time the water was drained through an opening near bottom *(closed with cork) and textiles were rinsed in water." [3]

"Dying of textiles and threads. The basic raw materials used for dying were brew or extracts of leaves, tree bark, plant trunks, flowers, roots. Mixing several components resulted in desired color shade. Such for dying black brew of "babounik"(laburnum аnаgyroides) leaves was used in which threads or textiles were boiled for 2-3 hours, after which it was soaked in the "swamp rust" for color fixation and dried without rinsing. Of other infusions used for dying in black were infusion of "muchanik"("talaknianka zvychajnaia" - Arctostaphylos uva-ursi), bilberries, or spiky "krushyna" bush (Rhamnus cathartica ) bark and oak leaves - which was covered on top with hot water and brewed for 2-3 days. After this textiles or threads were soaked in resulting brew for 3-4 days. Woolen threads were dyed black in the brew of birch bark , which was boiled for several hours. The woolen threads were soaked and dried several times in resulting brew filtered off the debris. [3]

The flax threads were dyed in cooked brew of oak bark, ash-tree or "krushyna" bush (Rhamnus cathartica ) bark, also oak acorns brew. The yellow color was achieved by using brew of barberry bush (“barbarys” – berberis vulgaris) bark, birch tree flowers, cornflowers, onion skins brew, alder-bark with the use of ashes stored in a small textile bag inside the vessel with brew, also apple tree bark brew. To achieve red color  the brew of cornflower with alder-tree bark was used. Sometimes alder-tree bark brew was also used in combination with rowan-tree bark. Just raw rowan-tree bark cooked with threads for several hours would dye it red. For green color birch leaves brew was used - the leaves were gathered in early spring when they still had some tree resin on them. The threads or textiles were soaked in this brew for several hours. The other dyes used brews of dried erica ("verasok" – calluna vulgaris), dry trunks of poppies, etc. To fixate dyes the threads were usually soaked in iron vitriol solution, "swamp rust", or "kvas" - a sour drink made out of bread. [3]

As to actual textile machines - they were mostly wooden. Below you can see few of those contraptions - images taken from reference [3]. Those were assembled inside the log houses of peasants in spring and pretty much took up most of the house. I seem to remember to have seen one in a log house of my grandma in Palesse in the sixties. You can see such machines now  in museums in Belarus, for example in Museum of Folk Art in Hrodna House of Folk Creativity. 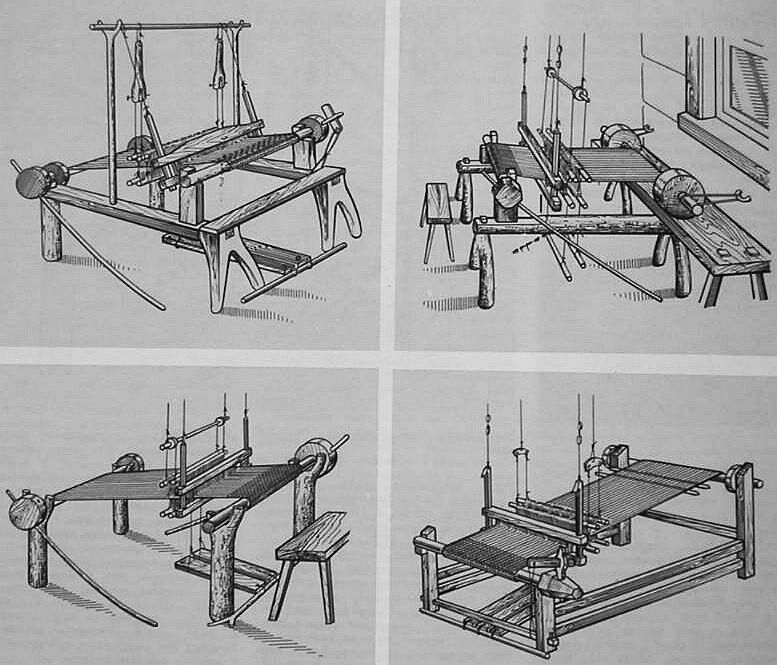 And there is one more - "horizontal" textile machine: 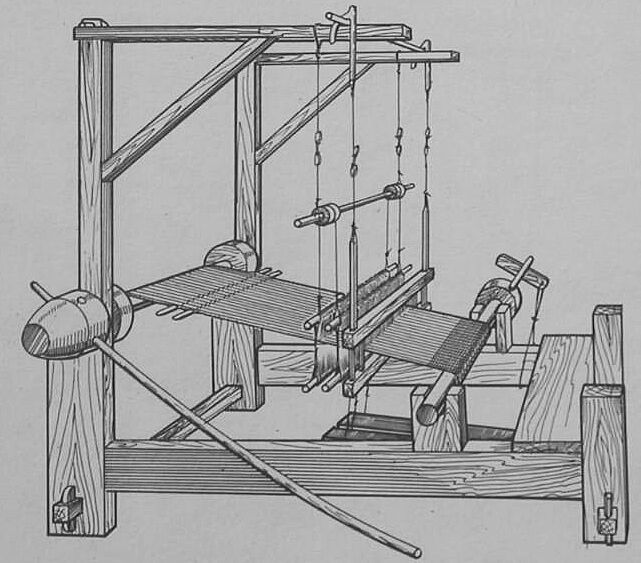 I hope someone who plays with such machine will be able to understand where the shuttle goes and which pedals switch the rows :) I do lasers not textiles :)

This file is a part of the Virtual Guide to Belarus - a collaborative project of Belarusian scientists and professionals  abroad. VG brings you the most extensive compilation of the information about Belarus on the Web.
Please send your comments to the authors of VG to Belarus