The origins of the Grand Duchy of Litva (Lithuania) 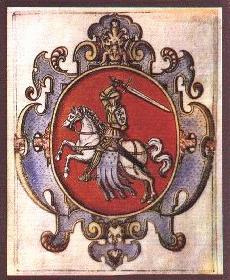 Who are the Belarusians, anyway? What is this strange country - Belarus - which appeared on the map a few years ago, a country that used to be called Belorussia, Byelorussia or even White Russia?

Most people in the West don`t even know that Belarus exists, that it has a language of its own and that it has its own history and culture. It is much more convenient to simply call everything between Brest and Vladivostok "Russia".

One of the great misfortunes of the Belarusians is indeed the fact that the name of their country sounds like "Russia", and so many people don`t bother to acknowledge the difference. Ukraine, for example, (which, like Belarus, is one of the former Soviet republics, bordering with Russia and similar in culture and language) is in a somewhat better position in this respect - most people probably now realise that Ukraine is an independent state and nation. Unfortunately, Belarus is still not taken seriously as a nation in its own right. Many people believe that the Belarusians never had a state of their own until 1991, that Belarus has always been part of Russia. Few people know about the existence of the Grand Duchy of Lithuania, the medieval Belarusian state. This was the heyday of the Belarusian nation.

But today, even those who know of the GDL refer to it as a Lithuanian state. This point of view can even be found in books on the subject, written by historians who should know better. Recently I came across the article on the Grand Duchy of Lithuania in the Encyclopaedia Britannica, where the GDL is described as a Lithuanian State with a strong Russian population - not a single word about the Belarusians! Again, it is the name that proves to be the Belarusians` undoing. It is called "Lithuania", so it must have been a Lithuanian state. Isn`t it strange, though, that the original capital of this "Lithuanian" state was Navaharodak, a Belarusian town 100 km South East of Minsk (see also Navahradak ), that the official language in that "Lithuanian" state was Belarusian and that the Grand Duke and the duke`s court, like the overwhelming majority of the population, spoke Belarusian? 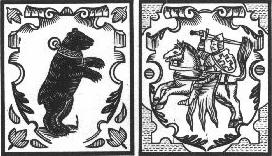 The simbols of Zhmud - Samogitien (left) and Litva (rigth) from the chronicles of the 16th century.

Unfortunately, there are only a few people who know about this now, after so many centuries of false chronicles and rewritten history. Up to the present day, the predominant version of Belarusian history has it that in the 13th century Baltic Lithuania conquered the Belarusian lands and united them to form a Lithuanian state, the Grand Duchy of Lithuania.

Belarusian history is indeed not an easy subject to study, because one comes across several different versions which contradict each other - the Russian version, the Polish version, the Lithuanian version, the Soviet version and finally the Belarusian version. Belarus is a country the history of which has been rewritten and falsified so many times that it is difficult to tell who can be believed and which books give an accurate account of history. Now, after the collapse of the Russia-dominated Soviet Union, it is finally possible to publish the Belarusian version and a number of books have appeared which deal in a very serious way with the contentious issues of Belarusian history. (Unfortunately they are all in Belarusian and have not been translated. Thus they are only accessible to a relatively small number of people.) The work of the historian Mikola Jermalovic is of particular note and sheds light on many aspects of Belarusian history which have never been examined in an objective manner. In doing this he always supports his conclusions with reliable historical sources. The following article is a summary of some of his findings regarding the creation of the GDL. It deals with the real location of ancient "Litva" (which gave its name to the Grand Duchy of Lithuania/Litva) and the old myth of the alleged conquest of Belarus by Lithuania.

This file is a part of the Virtual Guide to Belarus - a collaborative project of Belarusian scientists and professionals  abroad. VG brings you the most extensive compilation of the information about Belarus on the Web.
Please send your comments to the authors of VG to Belarus